The Long Walk HomeI remember it well; it was the night from hellWhen I took the long walk homeIt was in fifty-eight, and the hour was lateI was afraid and all aloneI had caught a ride through the countrysideAnd was dropped off at US nineteenThe night was black and I was taken abackTwas frightful for a lad of seventeenI had a desire to balk but I began to walkAnd headed toward the safety of homeI had just begun the trek when I heard a shriekOr was it more like a menacing moanThe hair on my arm bristled at the sudden alarmAnd my heart skipped a couple of beatsMy knees were knocking and my heart was rockingAnd I longed to be home under the sheetsI swear to you that something eerily blueArose and ran right in front of meWhether human or beast my fear was increasedAnd my speed increased by threeThen there was the bear with long black hairClose behind me a few yards or moreI didn’t imagine the bear, I swear that he was thereThen my speed increased by fourI heard a panther scream, it wasn’t a dreamAnd I broke the four minute mileOn that scary night, I learned to pray with mightAnd days later I was able to smileBut I’ll never forget the fear and the sweatThat I experienced that fateful nightPerhaps someday, the nightmares will go awayAnd things with me will be alright

This event really occurred one evening when I had hitchhiked home from school after attending baseball practice at Hernando High School. Practice had run late and I had trouble catching rides. Ergo the sun had set by the time that I reached the road leading from US 19 to Aripeka.  It was indeed a long walk home – not a single car came by and I walked (ran) the entire two miles home on a very dark evening. I may have enhanced the description of the events a bit, but not by much!

Meeting of the Hernando High School Class of 1958

They come together once a month, these true Americans. They break bread together but it is not the food that draws them. Rather, it is the strong, mutual and admirable nature of their character and their shared Raison d’etre that unites this group of senior citizens. They blatantly ignore their senescence and, at least for a while, travel back in time when life was much simpler and revisit the days of their youth.

Perhaps they did not know to appreciate it sufficiently when they were living it.

However, the intrinsic value of sharing a way of life that was unencumbered and easy is the glue that now bonds these classmates. And it is that tie that brings them from their various places of abode to unite once again and return to that source of strength to enhance their resolve against the tribulations that pervade today’s society.

Call them dinosaurs if you will, they don’t mind. Their strength lies in a shared, optimistic view of life that is etched in their very makeup and unshakable to the core.

So if you should happen upon John’s Corner Family Restaurant in Brooksville, Florida on the second Wednesday of the month, stand clear of the gray haired men and women in the back room for they are not in the now, rather they are transcending the troubles of this mixed up world and traveling back to the days when they were young. You can tell who they are by the unique glow on each of their faces.

I often think of our high school days, In an inspirational sort of way, About the marvelous days of youth, And a brighter, simpler day.

I think of Hernando High School, And the years that have quickly passed. And it is if we were young again, Rushing to our homeroom class.

And as we enter the classroom, We’re greeted by the smiling face, Of prim and proper Martha Pekovsky, A lady of distinctive style and grace.

First period is spent with Mr. Rogers, Propounding English tried and true. Then it’s on to Miss Campbell, And typing class one and two.

Before lunch we are exposed to math, With the distinguished Colonel Lawes. Who taught us the value of x and y, And the perplexing algebra laws.

Mr. Nunnally taught us science, In his inimitable, incisive way. Then it’s off to deliver an oration, And it is Sarah Tarr we must sway.

As we hasten by the school office, We see Mr. Graves busy at his desk, Making plans for next semester, As a principal he is among the best.

Next is study hall at the library, Where Mrs. Kitchen will give you looks, If you speak above a whisper, In her hallowed hall of books.

Then it’s off to football practice - Coach Yearwood helped us there. To learn the x’s and the o’s, And play the game with flair.

The school day at last completed, Our minds are full and primed, Ready to tackle homework, After dinner and some family time. Ah, the memories of our youth, When we walked the honored halls, Of our own Hernando High School, It’s no wonder the past now calls.

And as we enter our final years, It is the memories that will last, And give us reason to rejoice,  As we cling to lessons of the past.

When the last school bell had sounded, and we went our separate ways,

To change the world as we know it, and to do it in a matter of days.| We found that the challenge was daunting, perhaps beyond our grasp, But nevertheless we persisted, more dedicated with each day that passed.

And perhaps our influence was minor, and not on the scale we thought. And perhaps the world didn’t notice, as each of our efforts were wrought. And although we didn’t achieve greatness, we each in an inimitable way, Brightened the corner we were given, and from our goal we did not stray

Perhaps the world today is no better, and may appear to be dismal at best. But any bright spots one may encounter are there because we stood the test. And if we led one soul to Jesus, then we most certainly heeded the call, And changed one Democrat to Republican, then it was indeed worth it all. Patrick C. Palmer December 23, 2011

They are persons of unique destiny, Markedly different, yet the same. Imbued with a sense of morality, They seek not wealth or earthly fame.

And as you quietly observe them, You begin to understand their worth. There is naught about them to condemn, Their desire is but to save the earth.

And as they assemble this day together, They reminisce about days of yore, Of hardships bravely weathered, And times when kindred souls would soar.

And life seems to be much brighter, And all fears tend to dissipate. Life’s troubles are suddenly lighter, For the HHS Class of fifty-eight.

Perhaps it’s the feeling of unity, The bonding of each kindred soul. That forms a defined propinquity, And makes one feel good and whole.

May God richly bless each member, And may happiness be their fate, And may they always remember, Didactic lessons learned in 1958. 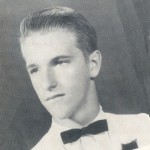 REFLECTIONS OF A HIGH SCHOOL REUNION

On May 5, 2008 the 1958 Senior Class of Hernando High School came together at theBrooksville,FloridaCountry Club to celebrate the fifty-year anniversary of their graduation.

To the casual observer it appeared to be a meeting of gray-haired, (and in some cases, no hair) senior citizens. There were no famous faces among the class – none had become President of theUnited States. In fact, there were no politicians among the group – no Nobel Prize winners – no movie stars – no persons of great renown.

Fifty years ago when they received their diplomas on the football field of HernandoHigh School they had great aspirations of making a difference in the world. Now, as they gathered together a half of a century later, the casual observer surveying the room may wonder if the dreams of this class, formed so many years ago, ever came to reality. That uninformed observer could easily assume that this nondescript group had not attained their goal.

But, that observer would be sadly mistaken. For beneath the surface of this group of Hernando High School Alumni, beyond the vision of the casual observer, there lies great substance and merit.

Within this group, dancing to the songs of the fifties, were PhDs, MBAs and BAs. More importantly than the formal education that they enjoyed was the education that they received about life, both at school and at home. This is the ideology that they carried with them when the 1958 Senior Class of Hernando High School departed that football field so many years ago and spread the tentacles of their influence through out the world.

And cover they world they did! Several served in the military, some studied abroad, and others traveled extensively. And, as they shared stories of their experiences that evening one came to the realization that just about every country in the world has been privileged at one time or another to host one of the members of this class.

Many roles in society have been filled by the class. As one looked around in the room that evening they could gaze upon the face of a retired teacher, a retired Coast Guard member, a retired college professor, a retired Sailor, a retired radio announcer, Sunday School Teachers, PTA members, members of fraternities and service groups, leaders in their churches, and the list goes on. Just about every aspect of society has been influenced by members of the Class of 1958.

The influence of the Class of 1958 cannot be measured. Sure the world today is not the same onethat they enjoyed years ago. The innocence of youth has been challenged by drugs and immorality. But, through the efforts of this unheralded, nondescript group of senior citizens, the didactic lessons so adamantly taught them in their youth have been promulgated throughout the world both by word and good example. They didn’t radically change the world, but they made it a better place to live.

Proud member of the Hernando High School Senior Class of 1958